Affairs in the Workplace

According to all the latest statistics, the workplace has become the #1 place for married people who engage in infidelity to meet the other person.

As women make advances everywhere in society, the old cliché about the boss and the young secretary carrying on an affair has been pushed aside by an increase in the number of men and women who work together as equals becoming romantically involved. The old separation of the sexes has passed and old boundaries to interaction have been replaced by no boundaries. Hearing about the “guys from work” or the “girls at the office” has transformed in the “gang at work”.

As we all know, people begin to get to know one another well when working together. The coed workplace offers lots of interaction, team work, travel, projects and longer work hours, all of which lead to members of the opposite sex who share many common attributes growing close. Lets face it, they share the same boss, same work stresses, same lunch hour, etc.

The unavoidable closeness, commonalities in life and the amount of time together can lead to friendship. They end up spending a great deal of time, on occasion more time than they spend at home, with this new “friend” so the friendship can become very deep. These friendships can quickly lead to strong emotional attachments. Strong emotional attachments with the opposite sex can often lead to romance. The most noticeable theme is that they work together, grow to understand one another and “relate” better to this co-worker than they do to their spouse. At home they hear about bills, problems, chores, etc. The co-worker friend offers someone who relates to talk with, someone who empathizes with them and does not bring any of the stress that home often has, making them all the more attractive. 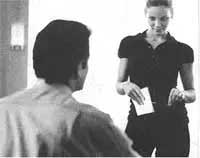 The coed workplace offers lots of interaction, team work, travel, projects and longer work hours, all of which lead to members of the opposite sex who share many common attributes growing close.

What is most noticeable is the common idea shared by many cheaters that they are an exception. They do not like the thought of infidelity, cheating or hurting their spouse and family. They relate the idea of infidelity to someone who has a cheap affair for the sex, while they are truly convinced that they are not part of anything like that. Instead they view the affair as unwittingly falling into an romantic situation. They began by making a strong friendship, something viewed as being very positive, which lead to the emotional involvement.

For those cheaters who don’t view their current relationship as being inappropriate, they too have a common theme: The friendship slowly turned into more and often they do not realize how far things have gone until sex came into play. This group truly believes that this just fell in their laps and cannot explain how it came about. They genuinely fail to realize how emotionally attached they are to the other person. They also are quick to point out how many others are involved in these workplace relationships and note that society has come to accept these things as being everyday occurrences.

This does not mean that the thrill seeking types who do not hold their relationships as sacred have disappeared. They are still just a prevalent as ever, but the new workplace infidelity has taken over an entirely new sector of the population and shows no signs of stopping. The idea of sex in the work place, flirting while working and having a secret from your co-workers is still a big part of the problem.

If you feel that your husband, wife, boy friend or girl friend is cheating on you, be sure to tell us eveything. As your private investigator, we are only able to get you the proof and evidence you need if you tell us the whole story. Anything less can have a dramatic affect on our ability to get you the information you seek. Although we are among the best private investigators in the industry specializing in infidelity and cheating cases who are recognized experts in court, we are not magicians! We cannot make things exist that don’t. We cannot find infidelity where it does not exist and sometimes, despite signs to the contrary, there is no infidelity or it is too infrequent or too well hidden to be found.

Accordingly, we do not guarantee any outcome on any case.

CheatingSpousePrivateInvestigator.com is owned and operated by ASG Investigations, Licensed Private Detectives headquartered in Detroit, Michigan with offices in Florida, Indiana, Texas and Chicago. The agency works on cases nationwide and also contracts with licensed private investigators in other states as needed.

This site is Copyrighted © 2022. Unauthorized use in part or in full is strictly prohibited and violations will be acted upon.

When you need to know if your loved one is Cheating, contact the right Private Investigator.

The consultation with a PI is free, confidential and strictly anonymous. e-mail: info@cheatingspousepi.com

Have you noticed a:

You may also want to consider reviewing your spouse’s credit card bills.